The National Wrestling Championship-2022 was held at the National Youth Services Council, Maharagama on 22nd and 23rd January 2022. Exhibiting excellent performance in the tournament Sri Lanka Navy clinched the men’s title for the 12th consecutive time.

In the tournament the SLN men’s team bagged 03 gold, 04 silver and 04 bronze medals along with the trophy for the champions. Meanwhile, the women wrestlers won 02 gold, 02 silver and 02 bronze medals with their runner-up award.

The Chief Guest at the award ceremony was Chairman of the Sabaragamuwa Provincial Council Mr. Kanchana Jayaratne. Officials of Sri Lanka Wrestling Federation, Chairman Navy Wrestling Pool, Commander KKN Pushpakumara and a group of naval personnel were also present on this occasion.

Under the able guidance of Commander of the Navy, Vice Admiral Nishantha Ulugetenne, who is also the President of Navy Sports Board, sports in the Navy have received fresh impetus and reached higher level, with the introduction of capable coaching staffs and expansion of sports facilities. 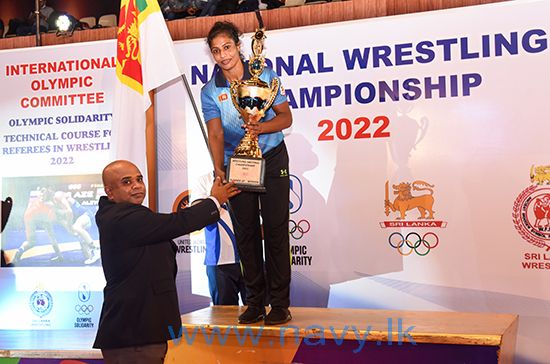